Dark Was the Night, Cold Was the Ground by Blind Willie Johnson.

Johnson was blinded at an early age. The story goes that his stepmother threw lye in his face in a fit of rage. His home burned down in ’45 and having nowhere else to go, he lived in the burned ruins until he contracted pneumonia and died.

Dark Was The Night, Cold Was The Ground was sent into space with the Voyager spacecraft in 1977.

It’s an honor to be represented by Johnson’s voice in outer space. 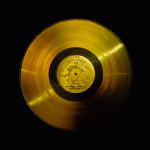