Turkish-born record producer Arif Mardin, who helped shape hit recordings by the Bee Gees, Aretha Franklin, Willie Nelson and Bette Midler among many others, has died at age 74, associates said.

Mardin died in New York on Sunday after a long battle with pancreatic cancer.

The winner of 11 Grammys, including producer of the year, he spent nearly 30 years at Atlantic Records before founding his own label at EMI, Manhattan Records, where he signed Norah Jones for her debut album. 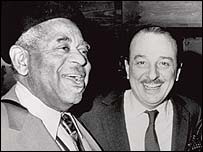 More recently, he worked with Norah Jones on her debut album Come Away with Me. He was also the first recipient of the Quincy Jones Scholarship at Boston’s Berklee College of Music.

More from the BBC.